Regenerative Thermal Oxidizers (RTO) and Regenerative Catalytic Oxidizers (RCO) are prized not only for their effectiveness at abating hazardous materials, but also because they can operate at remarkable efficiencies.

But, getting maximum performance out of RTO/RCO equipment takes serious know-how. A common mistake is to assume that fuel cost based on Thermal Energy Recovery (TER) efficiency only is a sufficient indicator of actual fuel use. In addition to available energy corrections, a true RTO/RCO energy consumption calculation requires that mass balance also be taken into consideration.

The RTO/RCO is a counterflow regenerator in which heat energy is alternately accumulated for the length of the hot period (RTO/RCO exhaust flow, or energy recovery) and then released from the heat exchange media for the duration of the cold, counterflow period (RTO/RCO inlet flow, or preheat). Since the RTO/RCO is unable to accumulate mass flow, these periods are basically the same in each direction of flow. Therefore, the energy released on the inlet flow (preheat) is closely linked to the energy absorbed (recovered) on the outlet flow.

Unless the process solvent concentration is high enough to sustain the RTO/RCO (typically 3% of the Lower Explosive Limit [LEL] for a 95% TER design), or a Natural Gas Enhancement (NGE) system is included, the combustion chamber burner will have to provide the additional energy to maintain the desired purification temperature. Thus, additional mass (burner combustion products) is added to the combustion chamber and RTO/RCO exhaust flow, causing an unbalanced mass flow in the heat exchange media, which in turn causes a lower TER and an increase in fuel consumption.

A common mistake is to assume that fuel cost based on Thermal Energy Recovery (TER) efficiency only is a sufficient indicator of actual fuel use.

In the case shown below, a 95% TER design, the actual mass balance fuel consumption and associated fuel cost is actually 66% greater than the amount indicated by a straight thermal energy recovery calculation. The takeaway is clear: when it comes to efficiency, TER is only part of the story. 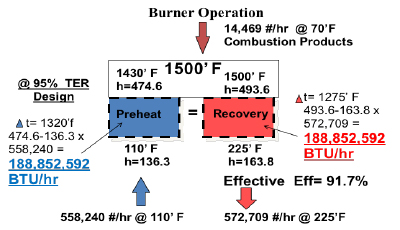 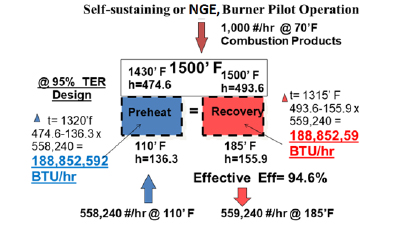 These factors go a long way in clarifying the efficiencies of an RTO/RCO process, but others play a role in overall fuel consumption as well, such as radiation losses, uniform air flow through the heat recovery media, and cycle time.

For example, the following chart shows the effect of cycle time and the potential reductions in TER: 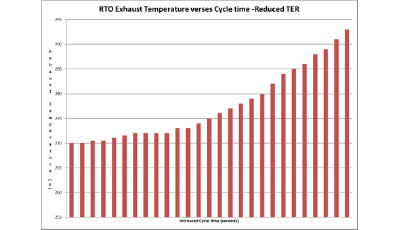 NESTEC offers several energy saving features to provide energy savings, many of which can be applied to existing RTO systems.

If you want to maximize your RTO energy conservation and reduce your energy bill, contact NESTEC for a free process analysis.