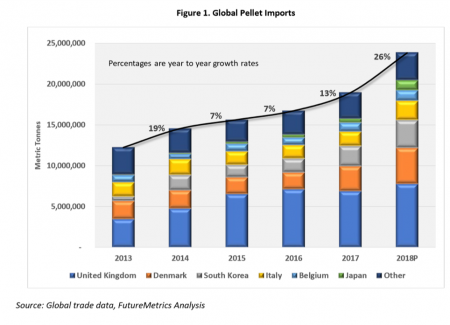 The demand for economical and sustainable fuel sources like wood pellets continues to grow. As in many other industries, air emission control is required to prevent VOCs (Volatile Organic Compounds) and HAPs (Hazardous Air Pollutants) that are emitted in the pellet manufacturing process from entering the atmosphere unabated. Compliance requirements typically come into play for facilities that are producing more than 200-250,000 metric tons per year (mpty) of pellets. Initially, air emission compliance focuses on the plant’s dryer exhaust, which requires a particulate control device prior to the Regenerative Thermal Oxidizer (RTO) if fly ash is generated from the dryer heat source.

Softwoods like pine generate a much higher level of VOCs than hardwoods. However, hardwood pellets release more HAPs and therefore can result in non-compliance with the EPA’s Maximum Achievable Control Technology (MACT) standards that limit the emission of ten tons per year for an individual hazardous air pollutant and 25 tons per year for all HAPs combined.

“Until recently, many permitting authorities simply assumed the hammermills, pellet presses, and pellet coolers did not emit any VOCs at all. That assumption began to fall apart in 2012, when a large facility, Georgia Biomass in Waycross, Georgia, decided to test all the facility’s units for VOC emissions. The results showed that not only did these units emit VOCs after all, they emitted a lot of them. Georgia Biomass found that their hammermills, pellet presses, and pellet coolers emitted more than 1,000 tons per year of VOCs, whereas the facility and the state previously believed the entire facility emitted less than 250 tons per year. This meant the facility had been operating in violation of its permit limits and the Clean Air Act’s major source requirements for several years, leading Georgia to levy heavy fines and issue a consent order requiring the facility to reduce its facility-wide VOC emissions to below 250 tons per year”. https://www.eenews.net/assets/2018/04/26/document_daily_02.pdf 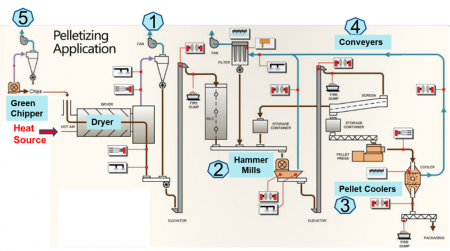 NESTEC has developed a proprietary air emission control system for the wood pellet industry with Particulate Matter (PM), VOC, and HAP control that covers all sources or just individual sources, as needed. Numerous systems have been installed by NESTEC that meet or exceed all current compliance standards. Furthermore, these units are engineered to operate with little or no additional fuel requirements.

A complete NESTEC system features several unique features to provide the best and most economical solution for air emission compliance, including:

The performance of the NESTEC typical wood Pellet installation is shown below:

If you have an application that requires air emission compliance and would benefit from conservation technologies that will substantially reduce your energy bill, contact NESTEC today for a free process analysis.