Aftermarket rebuild of an existing 25,000-SCFM eight-chamber Eisenmann rotary valve VF RTO, which was severely corroded and heat-damaged. This damage caused flow through the RTO to finally become inadequate for the process needs.

International Paper issued NESTEC a purchase order on February 1, 2010, to rebuild its VF RTO. Mechanical designs were completed onsite within the week and quickly approved. (A purge duct and damper were designed into the system to comply with NFPA safety requirements.) 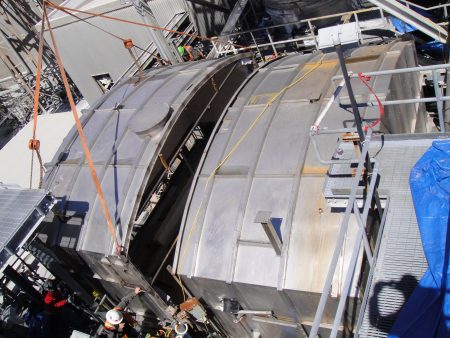 The 24/7 demolition and removal began on March 16 and took three days to complete, encompassing a damaged combustion chamber, refractory, structured heat recovery media, and rotary valve components. The original heat recovery design consisted of stainless steel “baskets” filled with MLM structured media. The ceramic media were found to be corroded and fused together; the baskets were corroded and heat-distorted. Nothing could be salvaged.

Old media and support baskets had to be jackhammered out of place. It was discovered that the media fusion had completely blocked off flow in many sections of the heat recovery beds, resulting in areas of extreme heat damage. A large hole was discovered that appeared to have been burned into the rotary valve rotor. Unexpected solids buildup beneath the media support cold faces had to be broken up by hand and removed. The flow distribution transition duct had to be replaced.

“Customer down time was minimized, and an improved-design oxidizer was brought online in seven weeks.” 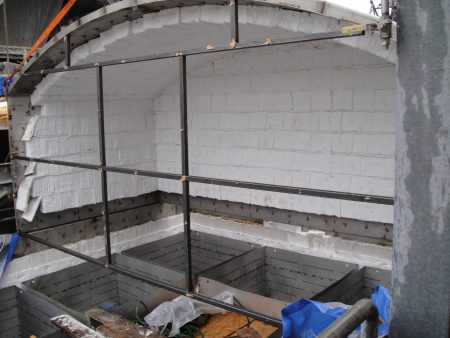 Installation was completed in five days, on March 23.

This is another example of NESTEC’s quick response to an emergency situation, showing how analysis, re-engineering, repairing/rebuilding, and recommissioning of another manufacturer’s equipment can be performed in a compressed time frame. Customer downtime was minimized, and an improved-design oxidizer was brought online in seven weeks.